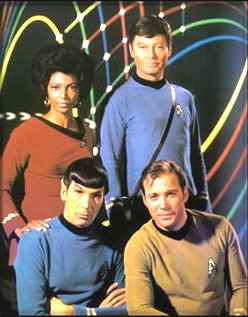 Today is the 40th anniversary of the first Star Trek show. On September 8, 1966, we first heard the words, "Space, the Final Frontier."

Cutting edge in spite of the now retro feel, Star Trek did break some TV ground. Although only on the air for 3 years, the original series has been followed by many more with hopefully, more to come.

Posted by Staying in Balance at 6:44 PM

I used to watch star trek voyager once upon a time!

Wow, it's been forty years! I remember my brother and I used to similuate the automatic doors when Captain Kirk would enter the Bridge. We would use our huge sofa cushions!

My son used to sit in his carseat, on top of the dining room table and PERFECTLY immitate the red alert sound from Star Trek, while I was cooking dinner--can't do it now--he sings bass!

I really liked Next Generation.