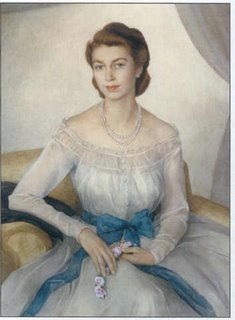 Besides being Paul McCartney's 64th birthday this past weekend was the "official" birthday of Queen Elizabeth II, who turned 80 years old. She actually turned 80 on April 21, but officially celebrates her birthday on a chosen weekend in June.

Christened Elizabeth Alexandra Mary, she suceeded her father King George VI to the throne on February 6, 1952 at the age of 25. During her first official trip overseas for her 21st birthday, she promised the British people, "...that my whole life, whether it be long or short, shall be devoted to your service..."

I think she is, perhaps, one of the few royals in recent memory to have kept that promise.

Hat tips to Recta Ratio.
Posted by Staying in Balance at 5:03 PM

Hmmmm..... being able to choose your own birthday. Interesting concept. I like mine just where it is -- close to yours!!!!! But Happy Birthday to her whenever it is. : )

I like my birthday too. Being born in May is very special! :)