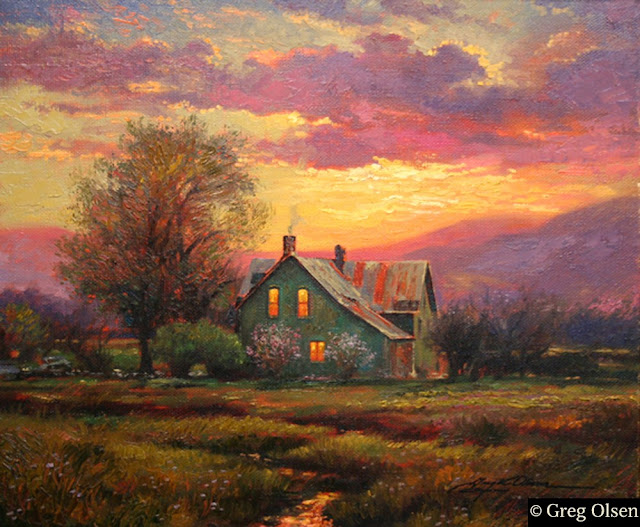 This painting is called Be it Ever so Humble by Greg Olsen.  It reminds me of this time of year, when we travel, either in reality, or in our minds, to the homes were we once lived.  Often, we come to a point where we realize that the houses, as well as the people who inhabit them, do not loom as large as they once did.

I was also attracted to the word "Humble".  Humility is important, and can cover a multitude of "sins".  None of us would live up to our own scrutiny if we took the time to judge ourselves as we so often judge others. A healthy dose of humility can keep things in perspective.

The painting itself is a beautiful mixture of early Spring colors, with pinks and yellows lighting up the sky, and, seemingly, filling up the farmhouse from behind. The green farmhouse with its rusty roof, nevertheless looks warm and welcoming, blending in a bit with the grass and shrubbery that surround it.

The tiny bit of smoke from the chimney promises a warm fire for all who stop by and the blue sky peaking through the upper left of the painting, gives us hope.
Posted by Staying in Balance at 5:23 AM

I love all the colors of the sky. Is that a stream in the front heading toward the house? Beautiful painting.

I know--aren't they gorgeous? You're right. There is a stream in the front.

Beautiful painting...I love art works that evoke emotion from me and this one definitely does that. Love the colors of the sky...thanks for sharing it!

The colors throughout the painting are gorgeous. I just want to sit quietly and look at it for hours. The artist drew me in with the stream at the front of the painting.