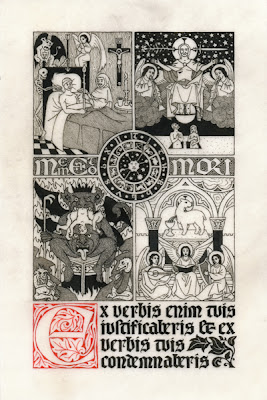 Daniel Mitsuri's Memento Mori is a collage of sorts, hand-drawn using black and red ink on calfskin vellum.  Mitsuri uses traditional Catholic images depicting, on the upper left, a man on his deathbed, with both the devil and an angel waiting to receive his soul.  On the upper right, Jesus is coming at the Last Judgement, raising the dead from their graves.  The bottom left depicts hell, with all its scary darkness.  The bottom right shows heaven, with angels singing before the Throne of the Lamb, who gives His blood for the salvation of mankind.

Across the center, we see "Memento Mori", Latin for "remember death", a popular theme in the Middle Ages, when death was common, frequent and often unexpected especially during the years of the Black Plague.

The circle in the center seems to be a zodiac/star chart--probably a reminder that when one's time comes, death is inevitable.

In today's modern time we are protected from death.  We don't see it as a matter of course in our farm animals and loved ones who die at home.  "Memento Mori" and indeed the various cultures who take a day per year to "remember death"--rather fittingly on the evening before our two afterlife-related feast days, All Saints and All Souls.

As in many illuminated manuscripts, the initial letter is large and highlighted, this time in red.

Mitsui draws inspiration from his own Japanese tradition which often uses only black ink when drawing, except for the signature, which is lettered in red.
Posted by Staying in Balance at 5:36 AM

This is quite interesting. The first thing I noticed with the red letter in the bottom corner. Chinese caligraphers each have their own symbol and use the red ink to "sign" their work. I think this is a piece that if it were blow up huge the details we could discuss would be immense. Interesting find.

I was thinking about the Chinese calligraphers when I saw it, especially when I noticed what I assume is his Asian last name.

Mitsui is a Japanese American, judging by his web site (http://www.danielmitsui.com/) and name. He is married to Michelle Vezzoli Mitsui, a mezzo-soprano. They seem like a very interesting couple. I like his work. It takes great talent to draw as he does, and it appears he is also expert in heraldry, a really challenging field. Thanks for this posting.

He is an amazing artist to draw all this by hand. Very much in the footsteps of Renaissance artists.