Father Corapi went over two important ways to discern if a so-called private revelation is legitimate.

1. You will see in the visionary humility resulting in obedience to legitimate Church authority, even when that authority seems to be persecuting the visionary. Throughout the ages, true visionaries have immediately and humbly obeyed all orders from their bishops to cease publicizing their visions. True visionaries often (perhaps always) give the contents of their visions over to their superiors, confessors and/or their bishops before making them public.

2. Nothing in the revelation is contrary to the Faith. A true visionary will not receive "revelations" that give a "new" teaching contrary to the Faith we have been given from the apostles. A legitimate vision will not tell us that there is no such thing as the Holy Trinity, for example, or that the Holy Eucharist is just a symbol.

If unapproved apparitions are not (necessarily) to be trusted, what are we to follow? Approved revelation. Tradition and Scripture. The term "Oral Tradition" comes from the Latin word "ora" which means "prayer". The way the Church prays comes from Oral Tradition. The Holy Mass can be seen not only in the writings of the early Church Fathers, going back to 40 years after the death of the last apostle, but also in Holy Scriptures.

At once I was caught up in spirit. A throne was there in heaven, and on the throne sat one whose appearance sparkled like jasper and carnelian. Around the throne was a halo as brilliant as an emerald. 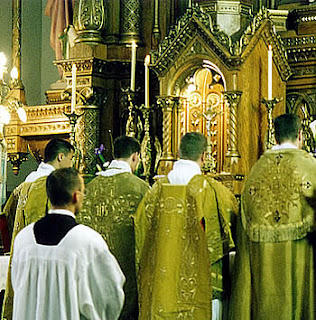 Surrounding the throne I saw twenty-four other thrones on which twenty-four elders sat, dressed in white garments and with gold crowns on their heads. From the throne came flashes of lightning, rumblings, and peals of thunder. Seven flaming torches burned in front of the throne, which are the seven spirits of God. 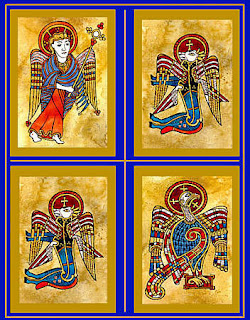 In front of the throne was something that resembled a sea of glass like crystal. In the center and around the throne, there were four living creatures covered with eyes in front and in back. The first creature resembled a lion, the second was like a calf, the third had a face like that of a human being, and the fourth looked like an eagle in flight.

The four living creatures, each of them with six wings, 8 were covered with eyes inside and out. Day and night they do not stop exclaiming: "Holy, holy, holy is the Lord God almighty, who was, and who is, and who is to come.
~From The Book of Revelation, chapters 4 and 5

I have no taste for the food that perishes nor for the pleasures of this life. I want the Bread of God which is the Flesh of Christ, who was the seed of David; and for drink I desire His Blood which is love that cannot be destroyed.

Take care, then who belong to God and to Jesus Christ - they are with the bishop. Take care, then, to use one Eucharist, so that whatever you do, you do according to God: for there is one Flesh of our Lord Jesus Christ, and one cup in the union of His Blood; one altar, as there is one bishop with the presbytery and my fellow servants, the deacons.

This food we call the Eucharist, of which no one is allowed to partake except one who believes that the things we teach are true, and has received the washing for forgiveness of sins and for rebirth, and who lives as Christ handed down to us. For we do not receive these things as common bread or common drink; but as Jesus Christ our Savior...

Posted by Staying in Balance at 10:24 AM

Given what's been happening over the past several years in Emmitsburg, that guidance on apparitions makes a lot of sense.

I was discussing the first point of discernment with DH just the other night. I was specifically remembering St Bernadette's obedience to the Church authority. She endured the scrutiny of her visions etc even on her death bed and became a nun in obedience to the Church. Many of her time did not belive her and she was indeed persucuted by some. Great Post!!

Thanks. I've seen what "apparition chasing" can do. Its never good, IMO, to put one's faith in unapproved apparitions. It gets too close to Gnosticism, from what I've seen.

good post. I remember as a fairly new Catholic the hysteria concerning 1999. I know of catholics who sold their home because they thought it was 'the end of the world'. They came to this idea from St. John Bosco's vision....As I stated to them AT the time that St. John Bosco's vision did NOT specify a YEAR. Still many became like 'henny penny's.

It is always wise to stay with the Catholic Church when it comes to Apparitions. I personally believe in many of them, but I do NOT interpret visions to suit a mood.

Peace and blessings to you:)

Thanks, Marie. I think the best we can do to "prepare" is to stay in the state of grace.

Anonymous said...
This comment has been removed by a blog administrator.
1:38 PM