The Queen Visits the U.S. 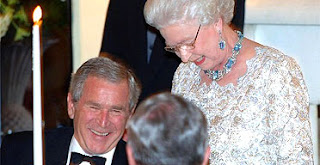 The Queen has been visiting America. On Monday, President Bush welcomed the 81 year old Queen to the United States, noting that she had visited for our bicentenial celebration "in 1776." When he realized his faux pas, he smiled and winked (what's up with *that*?!) at the reigning monarch and was met with laughter from the audience and a straight faced stare from Her Majesty. Bush then said, "She gave me a look that only a mother could give a child." Rather appropriate, I think, given the historic relationship between the two countries!

The Queen volleyed back at the President last night by opening the British embassy dinner with this remark: "I wondered whether I should start this toast by saying, 'When I was here in 1776...'."

When President Bush stood up to give his toast, he hesitated for a few seconds. "Your Majesty," he said, "I can't top that one."

Good call, George!
Posted by Staying in Balance at 3:18 PM

I saw on FOX News that Nightline(I think) will be having a debate between Christians and athiests.

I believe Kirk Cameron is involved and that the athiests got pretty ugly.

I dont get that particlar show here in Aussie land.

Did you watch it 4HisChurch? I cant imagine Kirk Cameron saying anything unkind or mean.

I didn't. My tv antena fell over outside (its too heavy to right by itself) and we essentially don't get tv at this point.