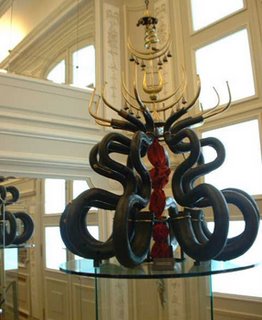 Given the fact that I was the only non-music major in the class, my presentation, for those of you waiting on the edge of your seat, was on the voice, which, in my opinion, is the instrument we are each given by God.

For any of you who are the least bit interested (and I know there must be millions of you out there!) visit Douglas Yeo's serpent photo gallery. This guy actually plays serpents and is involved in all kinds of serpent organizations.

The above pic is from the Musical Instrument Museum in Brussles, Belgium. If I had known something as cool as a serpent chandelier was in Brussles while I was there last year, I certainly would have gone and seen it!
Posted by Staying in Balance at 9:29 PM