Excellent article I wanted to share from Sojourners Magazine titled "Beyond Fire & Brimstone".

It beings by talking about how the traditional Jewish thought of the Sadducees didn't include a theology of an afterlife, focusing instead on how to live life on earth.  Later, the more "liberal" Pharisees became interested in the idea of an afterlife that they received from neighboring cultures. 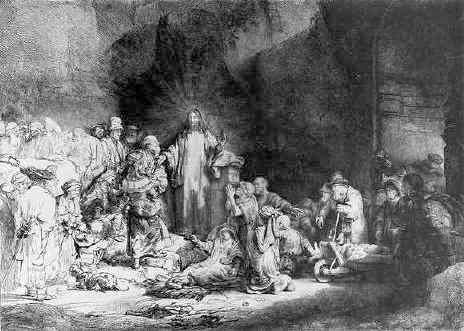 Jesus, was obviously in the latter camp--He believed and preached about a life after this earthly one. When He preached a "fire and brimstone" sermon, Jesus' purpose was not the same as the stereotypical television preacher of today. Jesus took the pervading idea of heaven and hell and turned it on its head.

Jesus' Good News was exactly the opposite.  He preached that the poor and destitute, the uneducated, physically unclean, social outcasts who were notorious public sinners would be welcomed by a loving and merciful God. Those who were "rich in this life", especially those who did not remember the poor, or treat those less fortunate with God-inspired mercy would be the ones who went to hell.

A second way that Jesus used fire and brimstone language was to warn people who were set on an angry, violent and vengeful path.  He told his listeners that if they turned to violence (for example, against the Romans) instead of non-violence and forgiveness that "no stone would be left on another" and the very thing they valued the most--the Temple--would be destroyed.  In 70 AD, his prophetic warning came true.

Jesus used fire and brimstone language not because he valued punishment, but to inspire his hearers to repent--to make a 180 degree turn in their beliefs and in their lives.  He wanted them to realize that God is an eternal, loving and merciful God who does not see people in the black and white categories that we humans often do.  He is always ready to forgive us and welcome us home. Jesus asked us to do the same to our fellow man--love even those who do not love you.  Otherwise, anger, violence and destruction become your path.

Jesus invites us to turn away from that all-too-easy, wide path and go down the narrow path of Godly love.


Posted by Staying in Balance at 6:09 PM

Saint Therese's mission had love in it. I like the way she taught us about love.