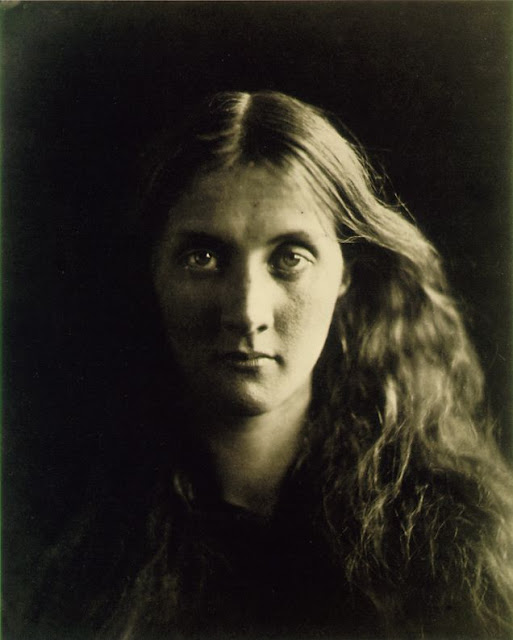 I have recently become aware of the early (19th century) photographer, Julia Margaret Cameron.  When other photographers were taking stiff and formal pictures, with no nuance or art, Cameron was photographing people with amazing attention to light.  Her subjects were either "stripped down", in simple clothing or dressed as believable characters, angels, Madonna and Child poses, or characters from plays.

This photograph is my favorite, of her niece, Julia.  The pose, lighting and dress are amazingly modern.  There is no affectation here.  She looks straight into the camera without the mask of costume, or even of a smile.

Without knowing it she has used many modern photographic portraiture techniques.  With only natural light available to her, her subject has what is called a "hair light"--light falling on the top of the head, on the hair.  She uses what is now called "Rembrandt Lighting"--the face is in half-shadow, with, in this case, barely discernible, "Rembrandt triangle" of light seen on the cheek of the shadow side of her face.  We see the important "catch-light" in her eyes--that little dot of light that makes the subject look alive.

In this example, her lack of costume or even any discernible period dress, makes her someone who could have been photographed at any time or place.  She could be us.
Posted by Staying in Balance at 5:13 AM

This is such a lovely portrait. As a professional woman photographer (retired), I'd say that we tend to go to the heart - try to reveal the inner self of the person.

One reason people didn't smile in portraits in the 19th century is that exposure time had to be much longer to record the image on a plate, glass, tin or whatever using the chemical available at that time. When photography graduated to film and studio lighting got more modern, we didn't need the amount of time the early photographers did to record the image. We no longer had to concern ourselves with the movement of the person or put them through the great difficulty of holding a smile.

Isn't it an amazing portrait?

Others of that era stuck with the stiff portraiture necessitated by the long exposure, but she managed to individualize her subjects.

Thanks for this lovely photo and your post. It made me look for more and I was blown away.

You're quite welcome, Joann! I'm glad you enjoyed it. She was an amazingly forward-looking photographer.