The Holy Name and the Power of God

Today's reading from Philippians declares that "at the name of Jesus every knee should bend, of those in heaven and on earth and under the earth."

A pious practice taught years ago, was to bow one's head at every mention of the Name of Jesus. In this way we are helping to fulfill the prophesy from Scripture.

The name of Jesus in Aramaic, the language spoken by Our Lord and His contemporaries, was Yeshua (יֵשׁוּעַ) 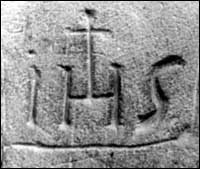 The "IHS" symbol that is seen in many churches, and, sometimes imprinted onto Communion Hosts, stands for the Greek for Jesus Christ and is a form of devotion to the Holy Name.

The "Jesus Prayer" is an ancient Christian prayer that is popular among the Eastern Christians. The most common, long form of the prayer is: "Lord Jesus Christ, Son of God, have mercy on me, a sinner." Other forms are shorter, such as "Jesus, mercy." or just the name, "Jesus". Below, it is given in Arabic.

Why does it matter that our God has a name?

A name is something individual to each person. When God revealed His Name to Moses, He revealed something of His nature. "Yahweh", God told Moses, means "I am who am." God is not a nebulous "force". God is not "electricity". God is not a "power" that we can "tap into", like a cell phone recharger. God has a Name. 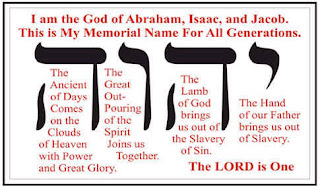 God is a personal God who loves each of us. He sent His Son, who was born as a man, with a Name that is Holy. The Power of God is not a mere "life force", but the very cause of our continued life itself. Fear of God is not because He will smite us but because He can save us. That is Power.

Modern people are often tempted to take themselves totally out of the worldly existence that God has placed us in, by denying that He is One, individual and personal. We want to either immerse ourselves in this world and deny God exists at all, or take ourselves completely out of this world by trying to control our spiritual experiences ourselves. Neither is what God intended. The God, who has a Name, sent us His son, born of a woman, to DIE on the cross, to take on our (very real) sins onto his (very real) human body so that we could live. God is as personal and real as our friend down the street. And He loves us so much more.

The Name of our savior is a very powerful form of prayer and devotion to use, especially during Holy Week.

Jesus Christ, Son of God, have mercy on me, a sinner.
Posted by Staying in Balance at 7:09 PM

The Holy Name of Jesus - I was reading this a few days ago.

Wow, Innocent! That's an excellent link! Thanks so much!

Fabulous post! A deacon I know taught me this practice last year; of course I had never heard of anything like it in the northeast, growing up in the catechetical void of the 1980s.

Just found your link. Can you add my blog? & i will do likewise? i suffer from bi-polar affective disorder..what's your interest in mental illness?
God bless

Well, Charley, I grew up in Baltimore in the catechetical void of the 1960's and 70's, but thank God there were a few good nuns still left!

MJ--Many of my loved ones suffer from various mental illnesses--anxiety being the most common. I suffer from depression.

As you know, I've been reading your blog for the past three days or so. I don't know if you remember me, from the TK forums.

I'm going through something right now. Whatever it is, it's been going on for a year. I'm confused. Could it be depression? I would very much appreciate your advice. Could I correspond with you through e-mail? I couldn't find your e-mail ID anywhere in your blogger profile, or back in the forums. If you don't entertain e-mails, as a principle, then it's okay.

But if you don't mind, me e-mailing you, I would be very grateful.

My e-mail IDs are:

You are in my prayers.

Hi, Innocent. Yes, I do remember you! Since I'm not a mental health professional, I hesitate to give out advice along those lines. I did, however, find a website that specializes in Catholic Therapists that you might want to visit. Check out, http://www.catholictherapists.com/.

When I get a minute, I'll have to do a post on them.

All the therapists there live in the US of A!

Anyway, thanks for the link. I'll go through the articles...