Protestant sees Jesus in the Eucharist 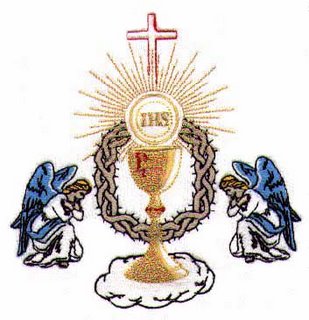 Andy Petty was only in the Catholic Eucharist Adoration chapel at the request of his fiance. He had been a member of the Worldwide Church of God, which, for 30 of the 40 years he had been attending, taught that the Catholic Church and the P0pe were the antichrist. They also taught that Jesus had short hair, not long hair and a beard.

So, when he looked up at the host (which he still thought of as a "cracker") in the monstrance that day and saw a man with a beard, he literally looked around to see where it was being projected from. He couldn't find any evidence of projection equipment and his fiance said she didn't see "the man with the beard" in the host.

Miraculously, his pastor told him it was a gift from God and encouraged him to convert to Catholicism, which he did. He now attends Eucharist Adoration once a week with his wife.

Eucharist Adoration is open to anyone, of any faith. Jesus is there waiting for you in the Blessed Sacrament.

For the location of a Eucharist Adoration chapel near you, see the list at The Real Presence Association.

Posted by Staying in Balance at 9:10 AM

The Real Presence frustrates a lot of protestants because it's so hard to grasp... but in the words of CS Lewis, the commandment was "take, eat," not "take, eat and understand."