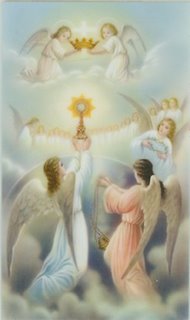 In honor of Friday's feast of Sts. Michael, Gabriel and Raphael, Archangels, I thought I would post a bit on the Church's understanding of these heavenly beings.

We learn about angels from Scripture. In Sacred Scripture, we learn that there are 9 "choirs" of angels as well as others who are mentioned. These 9 choirs include:

Angels' function in creation is to stand before the throne of God as part of the court of heaven. They are to praise God and minister to Him for all eternity.

A second function of angels is as God's holy messengers. The Bible gives us many examples of this. An angel announces the birth of Sampson, Isaac, John the Baptist and Jesus Himself. An angel brings comfort to Joseph, when he is concerned about Mary's unexpected pregnancy, and to Jesus in the garden of Gethsemani.

The third function of angels is as personal guardians--our guardian angels. Since we each have our own Guardian Angel, there are always angels all around us, especially during Mass. Wherever Jesus is, in His Real Presence, angels abound.

Saint Padre Pio used to send his angel on erands of mercy to others. We can ask our own guardian angel, and others' to pray for us before the throne of God. The next time you are in the presence of someone "challenging", pray to their guardian angel (and your own) for strength and support.

The book of Revelation mentions angels in a context that sounds remarkably like Mass.

Posted by Staying in Balance at 6:40 PM

I told my wife that if we have three boys that their names should be Michael, Gabriel, and Raphael.

She was fine with it until I mentioned Raphael. :-(

Both my dh and ds have St. Michael as their patron. I think he is such a strong patron for boys.

I think, at Mass, there are guardian angels, as well as other angels there to adore Our Lord. :)