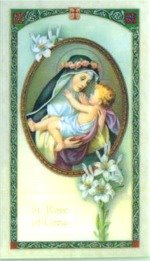 Today is the Feast of Saint Rose of Lima. Rose was born to Spanish immigrants in Lima, Peru on April 20, 1586 and baptized Isabel. By the time she was confirmed, she was called Rose, which is the name under which she was confirmed.

She lived at home in virtual isolation as a Dominican Tertiary where she experienced visions and recieved invisible stigmata. She meditated in her garden and embroidered to raise money to support her family. She was the first person born in the Western Hemisphere to be declared a saint.

Saint Rose of Lima, Pray for us!
Posted by Staying in Balance at 11:06 AM