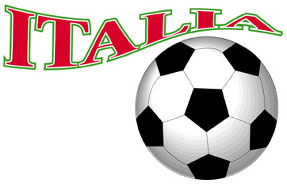 In a shocking development, Zidane of France, in the final game of his career, was ousted from the game for head butting an opposing player. The other players seemed not to take his example to heart, though.

This non-athletic American was surprised, at first, that Italy wore the blue jerseys and France wore the white. Once I got that straight, I was ok!

All in all, I find soccer much more exciting to watch than American football and I'm glad it was on network tv in the States.

Congratulations, Italy!
Posted by Staying in Balance at 4:47 PM

It saddened me that Zidane made that mistake. For whatever reason, his passions took over. Althoug, people are quite forgiving as hee still got the golden ball award.

Viva Italia! I'm glad you watched it too! That is funny about the uniforms, I had to be sure to get that straight too.
The headbutt was a bit of a surprise.

I sure was surprised at the head butt myself.