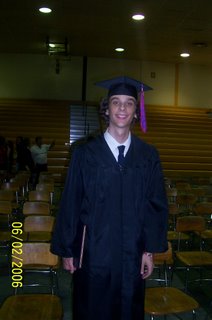 DS turns 18 today--Precisely at 5:10pm to be exact. He has gone from a long, skinny baby, to a long, skinny young man. He has always had a sense of humor and a good "ear", even before he could talk. He used to sit in his car seat on top of the dining room table and mimic the "red alert" sound from Star Trek, exactly on pitch while I cooked dinner.

As a small child, he used to naively eat just about anything I put in front of him, including tofu. Later, when he learned that not everyone's mother makes them eat such things, his tastes "developed" to be more in line with most of America's. Today, he prefers what he calls the "Anti-Atkins" diet--plenty of carbs.

Today, he plays the guitar, bass guitar, clarinet, writes his own music and sings. He will attend college in the fall majoring in computer gaming technology.

Friday he plans on getting his ear pierced. (Shhhhh!!! Don't tell his dad, LOL!)
Posted by Staying in Balance at 9:00 AM

Happy birthday to DS. What a lovely young man!
I love the food habits story lol.

Yeah. I figured if I got him interested in "weird" food early, he'd be a shoe-in for a varied and healthy diet. Oh well, can't win 'em all!!

but remember, I got him to eat his first vegitables!!!!!!! I put shredded carrot into his jello and when he tried to pick them out, I told him if he wants the jello he has to eat the carrots!!!! Then when I told him they were carrot "worms" with my conspiratorial grin, they became gross enough for a boy to like!!! :)

Happy Birthday DS. My daughter will be 18 this October. How time flys by....I love the graduation pic. I still can't get keep mine to sit still for long...somethings never change, lol.

Thanks Ginny! True--some things never change. Mine has never been fond of sitting with both feet on the floor--ever since he was a baby. It must be the position he was in the womb! I still catch him with his long feet propped up on the table at times.