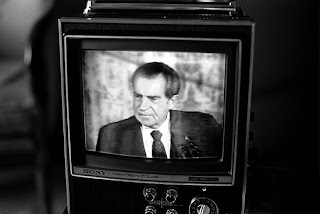 Forty years ago, August 8, 1974, President Richard Nixon resigned. I remember all of us (my parents and some neighbors) sitting in our family room watching the president speak on TV. This was back when we all made sure to watch if the president spoke in prime time because we assumed it was important. There were rumors that he would resign, but we were all still shocked that he did.

This was a big deal to us then. Today, it seems that impeachment is threatened on a fairly regular basis, and, when carried out, nothing much results from it. Nixon was the first and only president to resign from office.

When Watergate first broke, I was in one school, in the state where I was born. By the time Nixon resigned, I was in another school in another state were we had moved. I had grown up.

Unfortunately, for those of us who don't have a conscious memory of the Kennedy assassination, this was our watershed moment. This was the moment when cynicism was planted and took root.

He had accomplished a lot as president. He warmed up relations with Russia and China and finally managed to get us out of Vietnam  (albeit rather slowly and with much loss of life.)   All the more tragic, then, was his downfall.

I remember my father had ordered a set of books (Time Life, perhaps?) about the U.S. presidents. They were delivered right after Nixon's resignation and had a loose leaf insert stating that he'd resigned. That's where its history ended.

Those of us young enough to be impressionable and old enough to realize what was going on were left with such a denouement that it soured our opinion of authority figures of all kinds for decades to come.

The '60s were well and truly over.
Posted by Staying in Balance at 8:51 AM

You have changed your blog?

For now, I have. I haven't found a new inspiration yet.