Thursday began the Year of Faith in the Church and Fr. Dwight Longnecker has a series of posts on what is and isn't faith. His first post talks about myths about what faith is.  These are commonly held beliefs about faith that are untrue, and often harmful.

What Faith Is Not

The first myth is that faith does not allow questioning.  As Father points out, demanding this type of faith would be spiritual and psychological abuse and mind control.  It is one of the things that separate religious groups from cults. 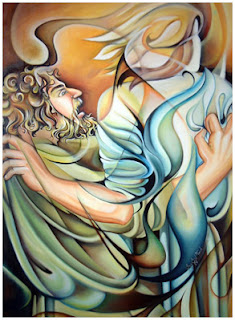 There is a story in the Old Testament about Jacob wrestling with an angel.  A priest I once knew used to preach about the need for us to "wrestle" with God--bring up our questions and concerns to the Almighty and not to be afraid.  I think this message gets lost in our quest to inculcate our faith onto the next generation.

It is ok to question.  It is ok to search and to shake one's fist at God, if that is what we feel.  God is big enough to handle it.  He is unconditional love, and is not offended by true searching.

The second myth is that faith is "trying very hard to believe something that is hard to believe".  Father Longnecker says "when non-believers scorn this kind of faith, I am on their side."  This is a childish and infantile belief in a sort of wishful or magical type of thinking.  It is seen today in the various "positive thinking"     advocates--believe hard enough and you will get your wish. The flip side of that is that if your life is not an easy path, you are not believing hard enough.
The third myth about faith is that it involves unquestioningly following a set of moral rules.  This is a bit like signing some sort of legal contract.  If you keep up your end of the bargain, God will whisk you up to heaven.  It's as simple as that.  The problem is that this has nothing to do with love--either ours or God's.  This is God-as-landlord faith.

In a separate post, Father talks about what faith is, focusing on Hebrews 11.1 “For faith is the substance of things hoped for and the evidence of things not seen.”  Father points out that, when this verse was written (in this translation--in Medieval English) "substance" meant not "the actual touch-able thing" that it means today, but was a philosophical term meaning "the inner essence of a thing".  He posits that "faith gives us access to the inner reality of things."

For the second half of the verse, he turns to marriage as an apt analogy.  Faith, he says, is the proverbial "leap of faith" that he likens to a young man in love, but afraid of marriage.  When he listens to others who have made that commitment, and watched them live it out, he decides to take that step himself.

What he discovers is that Love is there. "The step itself", the marriage commitment  "has provided him with the final evidence he needs. He is transformed by taking that step into that commitment and this step, by its very nature, provides the final proof of what he had doubted for so long."

Also, as in marriage, we "enter into a new state of being".  We are different in our essence, after we discover and commit to the Divine in our lives.

"The two shall become one."
Posted by Staying in Balance at 8:24 PM

this post reminds me of those who think God is a myth. recall what Jesus said?

Jesus saith to him: Because thou hast seen me, Thomas, thou hast believed: blessed are they that have not seen, and have believed.

faith in the Almighty is not hard. its only har for those who are spiritually blind, and they are blinded because of satan.

I think faith is hard for some people, sometimes. It is ok to be honest with God and wrestle a bit.

well its impossible to be dishonest with God because He can hear our thoughts, and knows our actions, and what's going to come out of our mouths.

i think people develope myths about God because of what society teaches or has taught about Him in the past, and present.

the only true way to know God is to accept Him into your life, and let Him take over it, and completely and utterly live for Him, and not yourself. personally, if half the people would truly get to KNOW Him then all myths about Him would be dispelled instantly.

That's very true. But there are times when we do not understand what God is doing and our human feelings get the better of us. It is in these times, that God is happy to listen to us question and rant because He loves us.

Unfortunately, I don't think it is possible for all the myths about God to be dispelled instantly as long as we are fallible human beings.

We need to hang on tight to the Lord and pray for the Holy Spirit to guide us.

A great post, Dymphna. If we Catholics really know our Faith and truly believe, we will be living and speaking in such a way as to draw others to Christ. That means we must consider the discovery of our Faith to be a lifetime job, growing in faith always. We must wrestle with God's word so that we may ultimately surrender ourselves to it. This involves taking time for silence and reasoning and searching. God always responds to our sincere seeking.

I love the art you put with this post. It is so full of gorgeous colors and energy, bringing the idea of wrestling with God to life.

Thanks, Barbara. I like your art commentary. It is very alive with both movement and color. Many of the paintings depicting Jacob Wrestling with the Angel just don't have that "wrestling" feel to them.

Faith is a constant wrestling match; how can you look at the world around you and NOT struggle with how to reconcile right, wrong, holy, unholy? What all these myths have in common is a sense of oversimplifying it. Faith is very complicated, and to say otherwise is to reduce it to something without power. In my opinion. :)

Exactly, Kathleen. Too many people feel ashamed of the daily wrestling that is going on inside of them. And, yes, we tend to oversimplify the faith. I think part of that comes from living in a Protestant (and lately, fundamentalist) atmosphere that is religion in America.