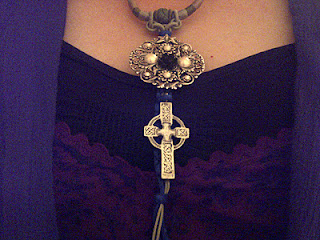 St. Patrick's Day in the United States is a day to celebrate Irish heritage.  There are many traditions, the simplest of which is wearing green on March 17th.  On the Irish flag, the green portion represents the native population of Ireland who are mostly Catholic. The shamrock, of course, was a way St. Patrick taught the people of Ireland about the Trinity.  Three, and yet, One. Saint Patrick's Day symbolism is tied up with Roman Catholicism in a way that some people may not realize.

In light of the current increase in attacks on Christianity in general and Catholicism in particular in the media-- traditional, online, and in social media, I think we should extend the "wearing of the 'green'" into our daily lives.  Actually wearing green every day is not very practical for most people, so, instead, I would like to encourage everyone to wear some symbol of their faith with pride and without fear.

A couple of decades ago, doing this would be non-controversial, but in today's  atmosphere of tolerance-for- all-but-Catholics it is becoming increasingly risky yet more and more important to do so. We need to live out our Christian faith in daily life by treating everyone--those who agree with our beliefs, and those who do not, with respect.

However, if we give up our right to express our faith out of fear, we will never get it back.
Posted by Staying in Balance at 12:11 PM