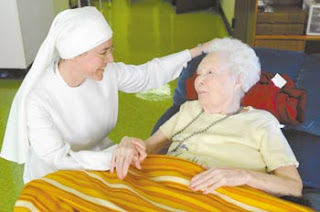 I just read that the Little Sisters of the Poor have said that the HHS mandate "Threatens to end our service to the elderly in America."

My own aunt has been a Little Sister since before I was born--and that's been quite a while.  My own grandparents were very well cared for at the Little Sisters of the Poor before their deaths.

For those who think free birth control should come before religious freedom, is this what you want? My own family would potentially be affected by this.

We would be chasing out an order of nuns who have been in the United States since 1868.  Think about that--an order of selfless sisters--gone--not because their order has declined in numbers--quite the opposite--but, because, in the "land of the free", they have been driven out of business by a mandate to pay for birth control.

Unbelievable.
Posted by Staying in Balance at 5:32 PM

Years ago, I spent 8 years with the Little Sisters of the Poor. They are amazing women who do important work.

It would be absolutely horrible if their work in the US was threatened because of the HHS mandate.

They have always been the example I think of when I think of truly living Christianity.

I pray that the unconstitutionality of the HHS mandate is upheld in the courts. It would be a terrible tragedy to lose these sisters. I wish there were many more of them. Also, if they are chased out of this country, I have to wonder if they would be welcomed in any other country since what the US does is often done in other countries. I wonder also how the HHS mandate will affect Mother Teresa's nuns. I can imagine that there are a number of Catholic orders who will have to leave. I have been praying for the deliverance of America from the pro-death cabal since the 2008 election.

I assume that the sisters would go to countries where they already are welcome, such as France. I wondered, today, what would happen to Mother Teresa's community. It is sad that the only nuns left would be those orders who cave to the mandate. :(