The First Thanksgiving--Bean Soup After Mass

The winners write the history, hence, the story of the "first Thanksgiving" at Plymouth Rock, Massachusetts with the Pilgrims and the Indians.  America being a "Protestant country" gave rise to the idea that the Separatists and Anglicans' feast with the Massasoit Indians in 1621 was the first in the New World.

The real first Thanksgiving in a permanent settlement in the New World took place 56 years before in what is now St. Augustine, Florida between Spanish explorer Pedro Menendez de Alviles, 800 Spanish settlers and the Seloy Indians. 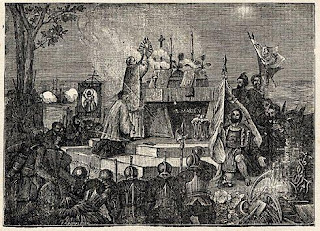 When Menendez landed with his 800 settlers, Father Francisco Lopez celebrated a Mass of Thanksgiving for the safe voyage.

After Mass, Menendez invited the local Seloy Indians for a feast, which consisted of a ham and garbanzo bean stew with garlic and red wine.  If the Indians brought food, it could have included such favorites as corn , squash and turkey as well as tortoise and catfish.

Starting Thanksgiving off by celebrating Mass is a great way to center ourselves with the reminder of Who it is we are thanking for our lives.
Posted by Staying in Balance at 4:15 AM

Whenever I go to Mass I think about it being the great Thanksgiving. I thank Jesus for being there in the tabernacle and for letting me be there. I ask Him to bless every one there and the priest, too. Many people in the world don't have easy access to Mass and the sacraments so I am very glad that I do.

That is very true, Barbara. I am thankful for your comments.