On Voting, the Government and Catholic Church Teaching

This blog is, admittedly, not one where you will read long intellectual treatises, but from time to time, I will put my thoughts "on paper" so to speak.  With the 2012 political race heating up, I've been doing a bit of research on voting and Catholicism and I've come to one conclusion above all other:  Neither the Democratic nor the Republican party embody Church teaching on social justice issues.  Hanging desperately onto either party does no good for the future of our country and does NOT in any way guarantee that one's vote will be in line with the teachings of the Church.

For example, there are those who bristle at the mention of voting with an eye towards social justice issues, seeing them as tied to abortion advocacy. Just because a majority of social justice advocates may be pro-abortion, doesn't automatically make social justice anti-Catholic as some try to claim.  In fact, the Church wants us to have a complete ethic of life, which includes being against abortion, capital punishment and euthanasia and for such things as fair and livable wages and the right to basic health care.

It is the Democratic and Republican parties in the United States who are putting these issues in separate boxes and forcing apart what could be one of the biggest voting blocks in the country. If we as Catholics had candidates who would truly be for the common good, imagine what could be done!

The common good is the very purpose of the existence of government.  I have become convinced that government, as it stands today, has gone far beyond the common good and into the good of those in power. 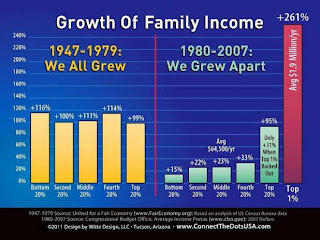 This income chart from Vox Nova shows, as their accompanied article implies, "the problem" with today's economy.  The top 1% of  earners in the country have seen a 261% increase in income from 1980-2007 compared to a paltry 15-55% increase for the rest.  (Notice that the 55% increase is for the top 20% and the 15% is seen in the bottom 20%.)   Think things were always this bad?  The graph on the left shows that income increases were stable across all groups from the end of World War II until 1979.

That does not bode well for our future, or for the future of the so-called "free world."  Those in power still give lip-service to ideals such as "freedom" and "democracy" while concentrating decreasing financial resources in the hands of fewer and fewer people.

This is the stuff of which revolutions are made, something which is beginning to be seen in the various OccupyWallStreet protests, which have now begun to spread around the country.  You will read and hear, by the way, that these protesters are disaffected youth, immoral, and perhaps violent.  Perhaps that is true of some.  But that still does not in any way prove that the protest themselves or the impetus behind them are not philosophically sound.
Posted by Staying in Balance at 2:23 PM

In regards to OWS.

I've been thinking the same things lately and recently stumbled upon a Catholic economic philosophy called Distributism (G.K. Chesterton was a big advocate of it). The ideas are really growing on me, I just wish there was a U.S. political party that embodied these values.

I wish we'd have a political party that embodied Catholic values as well.

I'm so glad you posted this! This is one of my perennial, and growing, frustrations, as a person who is caught in between liberal and conservative. It starts to become painful after a while.

It really does. I think I will probably never vote for a mainstream presidential candidate again, as things stand right now.