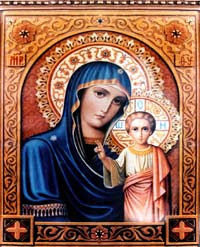 I have just become aware of a Church approved apparition that has taken place in the Middle East.

A few days later, a 3 inch icon in Myrna's home began to exude the oil as well. Soon, Myrna experienced visions of Our Lady and Christ. The basic message seems to be one of unity between the Catholic and the Orthodox Church, beginning with unity in the celebration of Easter. (Normally, the Catholic and Orthodox Churches celebrate Easter on 2 different days. Occasionally, the feasts will coincide.) After visiting Damascus, Pope John Paul II gave special permission for the Catholics in Syria to celebrate Easter on the same day that the Orthodox do.

Besides being excited to learn of a new Church approved apparition, (as opposed to the many that are out there being promoted in spite of being disapproved by the Church) I was rather stunned to learn of its focus of unity between the Eastern and Western Churches, given my fairly recent blog list focusing on that very subject, not to mention the eerie similarity of the icon (above) to the one I had recently posted on my sidebar. Hmm....

Your heart belongs to Me, unless that heart has possessed another god. The Church is the Kingdom of Heaven on Earth. He who divides it has sinned. He who is happy in its divisions, has also sinned.

~Jesus to Myrna of Damascus

For more information on this apparition, see Fatima Family Apostolate and Unity Publishing. Hat tip to Innocent for pointing me to this relevant link as well.
Posted by Staying in Balance at 10:05 PM

It is! The Lord wants true unity!

This is wonderful news.

If only the "two lungs" were really united soon!

{ It would be interesting to see how they surmount the issue of the Filouque clause, though! )

Yours in Christ,
Innocent

Exactly! The Church really needs to breathe with its two lungs!

Yours in Christ,
Innocent.

Thanks, Innocent. I actually had that link bookmarked. I don't know why I didn't add it.

I think this is something that we should all pray for in our daily prayers- unity between the Catholic and Orthodox churches.

We are more similar than we are different, we should focus on the things we have in common.

I pray these rifts will be healed soon. It's great to see progress like this!!

I agree, Rachel. We should all pray for Christian unity. In fact, that is the theme of today's readings.