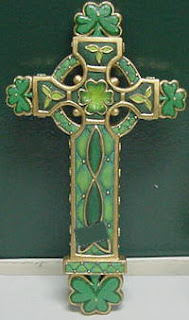 Saint Patrick was the first missionary to Ireland. He was born in Scotland in 387. At 16, he was sold into slavery in Ireland, where he prayed continually to God and found strength. While there, he learned to love the Irish people and learned about the Druid religion. The Lord was preparing him, through his captivity, for his future mission.

Told in a dream to escape, he returned to his homeland, but continually felt the pull to go back to Ireland to evangelize the pagan population. While in Ireland, Saint Patrick performed many miracles and used the now-famous shamrock to explain the concept of the Holy Trinity.

The influence of Saint Patrick on civilization cannot be underestimated. His introduction of Christianity to Ireland paved the way for future groups of monks to painstakingly hand copy manuscripts, both pagan and Christian, which became the record of western civilization that was preserved after the fall of Rome.

Saint Patrick, pray for us!
Posted by Staying in Balance at 7:29 PM

I love the last paragraph...how true.

Thanks. I really think St. Patrick is a saint for our times.