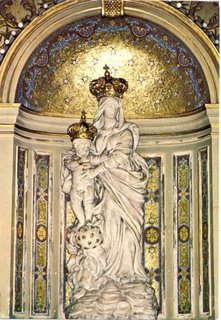 I realize this is a couple of days late, but I thought it was certainly worth spreading anyway. The Blog of the American Chesterston Society has wisely pointed out that Friday was the Feast of St. Michael the Archangel and that nine days later, (that's the exact length of a Novena, folks!) is the Feast of Our Lady of Victory, commemorating the Victory of the Battle of Lepanto.

History of OLV
The Battle of Lepanto was fought between the Muslim Turks and Catholic naval forces mainly from Spain, Venice, and Genoa. Pope Saint Pius V called for all of Europe to pray the Rosary for victory in this battle, since the Christian forces were at a disadvantage and not favored to win. This victory was won on October 7, 1571 and the feast is still celebrated today under the name, Our Lady of the Rosary.

Novena for Peace
The idea of this current novena is to pray for peace and pray for Muslims every day during this 9 day period. Since the Rosary was a pivotal prayer in the victory of Lepanto, that is the suggested prayer for this Novena. (It is suggested that we pray the Sorrowful Mysteries each day). Of course, going to Mass every day would be efficacious too, as would praying in other ways. I think we could add 2 Rosaries sometime between now and October 7 to make up for the days we have missed.

The world needs peace, now, more than ever. Let's do it!!!

Posted by Staying in Balance at 5:59 PM

Amen we sure do need it! Thanks for the novena prayer.

Is it BBC policy to destroy all religions other than Islam?

Catholic TV licence payers please note that your hard-earned cash has been used to broadcast a pile of unsubstatiated B.S. (http://news.bbc.co.uk/1/hi/programmes/panorama/5389684.stm ) that puts the Vatican at the center of a global pedophile ring.

If the BBC seriously wants to investigate religiously inspired pedophilia it should take a look at this :
http://www.catholicapologetics.info/apologetics/islam/gislam.htm

But I suppose it never will. Too much risk of a fatwa.

Hoping and preaying for peace? Check out the free download of "Dona Nobis Pacem" at
http://www.fscc-calledtobe.org/living.asp

Anon: interesting you should mention "Dona Nobis Pacem" by Beth Nielsen Chapman. I just read an article on her in Our Sunday Visitor this morning. I knew of her hit song, "This Kiss" but had no idea she recorded a CD of Classic Catholic songs called "Hymns". In researching for a CD of multi-national sacred songs, she was horrified to discover her own heritage (Latin Catholic) was not to be found--so she recorded her own.