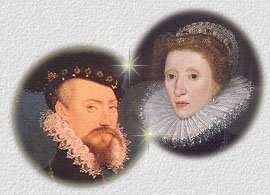 Elizabeth I, and the man who some report was her lover, Robert Dudley, used what is now known as "text speak" in notes to each other, 400 years before the invention of the cell phone.

Researchers reveal that royal love letters between the British monarch and Robert Dudley, the Earl of Leicester use abbreviations similar to those currently used in modern text messaging.

"Your great favour, thus oft and so far to send, to know how your poor @@ doth, is greatly beyond the reach of his thanks."

Posted by Staying in Balance at 10:20 AM

awww old fashioned text!
Hope you are recovering more and more each day!