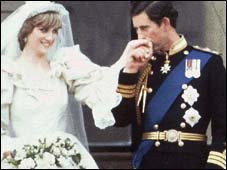 It was twenty five years ago today that Lady Diana Spencer married Prince Charles of England. Who was to know that it would end as tragically as it did (except perhaps Charles, who had no intentions of giving up his mistress)?

Anyway, I got up in the wee hours of the morning to watch The Wedding, dreaming of my own wedding which took place 3 years later, on July 28.

The ironic words the Archbishop of Canterbury used to conclude his sermon on that day are haunting.

May the burdens we lay on them be matched by the love with which we support them in the years to come. However long they may live, may they always know that when they pledged themselves to each other before the altar of God, they were surrounded and supported not by mere spectators but by the sincere affection and active prayer of millions of friends.

Posted by Staying in Balance at 11:06 AM

I remember the day very well! They had a huge publication of coffee table books about their wedding. It is sad how it ended.

Its very sad. I can't help but think, that if they had been Catholic, the marriage could have been annulled because Charles never intended it to be an exclusive union.

Based on his intentions of an extramarital affair, there was no marriage at all and could be annulled if it was a Catholic marriage. I wonder if it would be true that if either of them had converted to Catholicism after their divorce, they could've still married in the Catholic Church because their first marriage would not have been recognized by the Church.

That's what I thought too, St. Peter's.